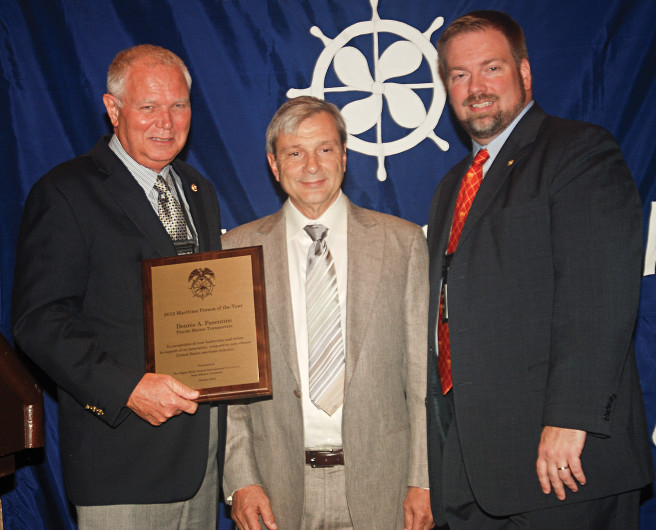 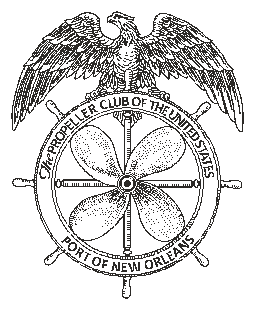 “Dennis started with one boat and a dream some 13 years ago and now has 83 new river tow boats, 243 tank barges and more than 70 dry cargo barges,” Flowers said. “His contribution to the maritime community is forever continuing and his vision only continues to grow.”

Pasentine dedicated his entire life to the maritime industry, starting work as a tankerman, bunkering ships and barges. He rose quickly through the industry and held many titles including captain, port captain and operations manager. In those capacities Pasentine developed significant safety, operations, and personnel policies, as well as overseeing the hiring and training of all crews and operational personnel.

“This early commitment to safety and personal development foreshadowed the careful manner that he would eventually run his own company – Florida Marine,” Flowers said.

Florida Marine currently employs more than 800 dedicated individuals in a family setting and all three of his children, Dennis Pasentine Jr., Cynthia Pasentine Hull and Johnny Pasentine work with him.

In addition to his business success, Pasentine also fills his time supporting philanthropic events and foundations. New Orleans Saints Quarterback and dear friend of Mr. Pasentine, Drew Brees, attended as a surprise guest to convey accolades for Mr. Pasentine’s charitable support, along with their personal friendship.

In addition, Brees cited Pasentine’s founding of “Friends of the Front Line,” a non-profit foundation assisting firefighters after Hurricane Katrina and his support of the JK Living Foundation, Habitat for Humanity, Smile Train and the Jonathan Vilma Foundation.

Pasentine said he was honored to have been chosen among the accomplished past recipients of the prestigious award. He expressed heartfelt thanks to the Propeller Club membership and board for the honor and to his Florida Marine family and colleagues for attending the event.

The Propeller Club aggressively promotes the maritime industry through many of its programs and partnering with other similar organizations. Their goal is to educate legislators and the public as to the importance and necessity of all waterborne commerce.

Today, the International Propeller Club of the United States is an international business network dedicated to the promotion of the maritime industry, commerce and global trade. There are more than 80 Ports in maritime locations around the world, including almost 30 in foreign cities.